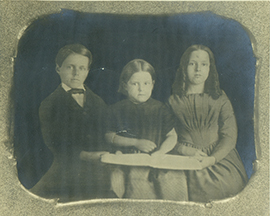 Above Left: Principal Cyrus Smith Richards, KUA Class of 1831. Above Right: Cyrus and Helen Richards’ children scanned from a tintype: Charles, class of 1854, Abbie, Class of 1859, and Helen, Class of 1857. Left: Richards preaching in the old Meriden Congregational Church.

Cyrus Richards was appointed the third principal of KUA in 1835 on the very day he graduated from Dartmouth College. He was 27 years old. Richards had not only studied under KUA’s second principal, Israel Newell, but had also assisted him for a term when Newell became ill during Richards’ senior year at Dartmouth. He had proven his great ability as a teacher and Newell had surely recommended him to the Trustees as his replacement.

Cyrus, born in 1808 on a farm his parents had settled in Hartford, Vermont, was the eighth of nine children and only four years old when his father died. His oldest brother, who was 16 at the time, gave up his dreams of an education to help his mother run the farm. While still a young boy, Cyrus was “bound out” by his mother to live and work on a neighboring farm. Over a century later, his granddaughter, Helen Richards, wrote in the Kimball Union Bulletin 1941, “He was often homesick and although he could see the smoke from his mother’s chimney off in the distance, Cyrus rarely got home.”

Cyrus had grown up, Helen continued, “…as a barefoot boy in homespun, but with a love of books and an eager desire to learn…two months of school every winter furnished his formal education, but it was supplemented by constant reading and study at home, so that he early won the reputation of being one of the best scholars in the neighborhood.” Cyrus was fortunate that both his foster mother and the local teacher recognized his scholastic ability and encouraged him to seek a college education. Born with a clear, tenor voice, Cyrus was able to save a little money as a music instructor. This, along with money raised by citizens in the area, allowed him to enter KUA in 1828 in preparation for Dartmouth College. 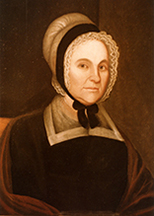 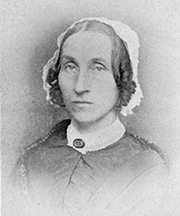 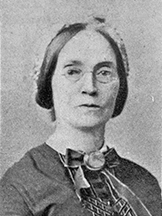 During Richards’ fourth year as principal, Madam Hannah Kimball, now 81 years old, decided to act on her long-cherished desire to found a Female Seminary. Bricks and other material had already been delivered to the planned building site, less than a quarter mile west of the Academy, when the trustees and Principal Richards approached Hannah to discuss the advantages to both schools if she would agree to join her building to their smaller one, creating one institution, with two separate, but equal, departments. Madam Kimball was persuaded, and maybe a little relieved, to combine the schools. The cornerstone for the new building was laid on May 8, 1839. When the “Third Academy” opened its doors in the fall of 1840, young women were officially KUA students.

Left: The Second Academy, on the left, became a wing of the new building, now called the Third Academy, built partly with Madam Hannah Kimball’s bequest of $10,000, and with her blessing, in 1839-1840.

Answer to Last Week’s Question: The Meriden Library, located on Bean Road directly across from Poor Thom’s Tavern, replaced a small library located in an upstairs room in the old Brown School, located west of the Meriden Town Hall. The building was sold and torn down in 1966. In the early 1960s, a group of dedicated townspeople, Friends of the Meriden Library, began a campaign to raise money to build this library; it was dedicated on November 20, 1965.

Question of the Week: KUA elected a woman in 1840 as principal of the Female Department. However, the term Preceptress was also used to describe her position. Does anyone know the origin and meaning of that title?

Faculty member Darrell Beaupré, class of 1986, correctly answered the question, why was KUA first called Union Academy? The “Union” part of the name refers to the union of New England churches that came together in order to found the Academy.