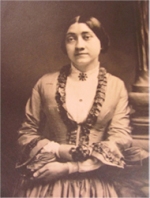 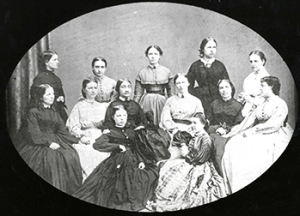 Helen Peabody was born on May 6, 1826, on a farm in Newport, NH, the youngest of 14 children. As a child, she was deeply interested in academics and, encouraged and aided by her brothers, enrolled at KUA where two brothers and two sisters had studied. Helen was the first of her family to study in the newly organized Female Department that had opened in the fall of 1840. She completed her KUA studies in 1844 and entered Mount Holyoke Seminary, South Hadley, MA, where she graduated with high honors in 1848. As a favorite student of its president, Mary Lyon, she was hired to stay on as a teacher.

In 1855, Helen was chosen as the first president by the Trustees of the newly-established Western Female Seminary in Oxford, Ohio, a daughter school of Mount Holyoke. Her original faculty consisted of five other graduates from Mount Holyoke. Helen held the position for 37 years. While a number of other leadership offers came her way over the years, including that of first president of Wellesley College in Massachusetts, she couldn’t be persuaded to leave Western, the school she had helped establish and had come to love.

Helen retired in 1888, and traveled around the country and the Orient before finally settling in Pasadena, CA, where she died in 1905. In a tribute to her, Western’s new president, Lelia McKee Welsh, wrote “Miss Peabody found a chaotic condition of affairs with the new college.…It was hers to evolve order from chaos…to make one dollar do the work of two….with the aid of wise and generous trustees, a strong faculty, and loyal alumnae and friends, Miss Peabody safely conducted the young institution… finally handing it over to her successor free from debt, and with a moderate endowment.” She added that Helen’s greatest asset may have been her, “…big, warm heart…expressed…in the warm hand-clasp and the loving words of welcome which met [each student] at the very threshold of her college life, and which went with her, not only through her college career, but throughout life….”

The school was renamed Western College for Women in 1904. Later, it became affiliated with its close neighbor Miami University who bought the college in 1974. By 2007, Western had fully integrated into Miami’s College of Arts and Sciences and it is now the Western Program at Miami University, OH. Western’s Peabody Hall still stands and, according to many students, Helen’s ghost haunts the old hall, causing many of them to rush past her portrait. They say her eyes follow them as they go by her portrait. Helen had always been an outspoken opponent of coeducation and was not at all happy with the Miami men who, not always accidently, wandered onto her campus; she had banned any unsupervised contact between the sexes. One reporter recently wrote in the university newspaper, The Miami Student, ”Ms. Peabody took her convictions to the grave, and it is not hard to imagine how she would have reacted to the sight of Miami men freely roaming the corridors of the Hall that now bears her name.” Poor, kind Helen Peabody, what would she think if she could know that her ghostly hauntings have become one of Miami University’s 12 legends?