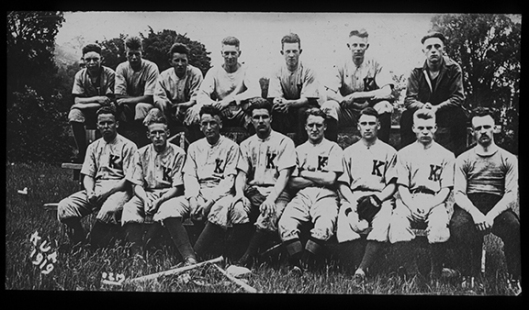 It’s a sure sign of spring when “opening day” comes to Major League baseball– the 2019 season gets underway today, March 28. Outside at KUA (or anywhere, USA), you’re sure to hear the smack of a ball landing in a glove as young men and women stretch their arms in preparation for a new season. The glass slide shown above was taken of the KUA baseball team one hundred years ago this spring. The August, 1919, Bulletin of Kimball Union praised the team for achieving more success than was expected of them. The writer further commented, “The team was composed mostly of inexperienced players and on paper seemed to have little that could inspire the confidence that wins games, but it was this team that fought up hill through the season, winning five games out of the nine played.”

Baseball has been around longer than any sport at KUA. In 1843, the academy purchased the field above Munro House, once known as The Old Playground, from Hannah Kimball’s nephew Levi Bryant for $100. The school spent another $75 to level the field. It is possible that some form of intramural baseball was played there from that time. We know that the first game with an outside team was played in Windsor, Vermont, in April 1892, “…which resulted in a glorious victory for K.U.A. The game was won [10-5] by seasonable hitting, sharp base running, and nearly perfect field work.”

Today, Powers Field is home to the boys’ baseball teams while girls’ softball, which has been a sport at KUA since 1998, has its own home on Hall Farm Field.  Good luck to both teams in the 2019 season! 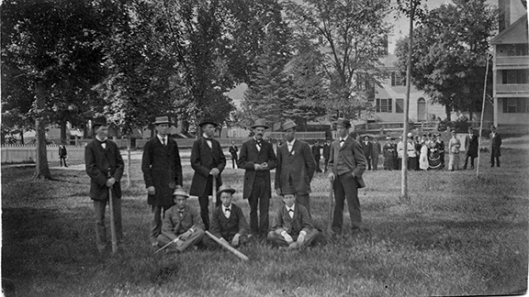 The first baseball photograph in our Archives collection is from 1880. Called the “Base Ball Nine,” it was taken on the church green as part of a series of 27 photographs called, Views of Meriden, N.H. and printed as either cards, like this one, or as stereoscopic prints.