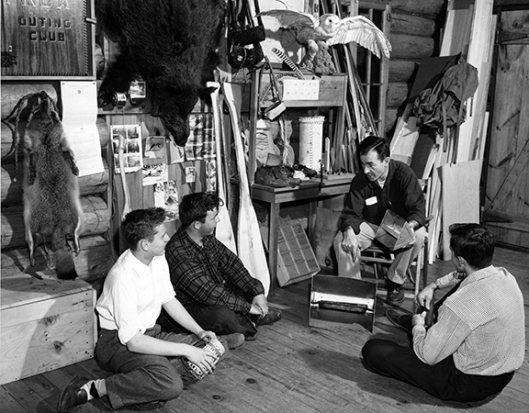 In the middle of the twentieth century, KUA was one of a handful of colleges and high schools who participated in Woodsmen’s Weekends, where students competed in practical outdoor events such as log skidding, sawing, log-splitting, fly-fishing and canoe racing. The first Woodsmen’s Weekend came into being in 1947 when Ross McKenney, advisor to Dartmouth’s Outing Club, and KUA’s Outing Club advisor Bill Robes ’35 sat chatting one day and McKenney commented on the lack of use of their shelter chain[saw]. One of them said, “You know maybe people are scared of them, they don’t really know how to use an axe, don’t know how to take care of themselves out in a shelter. Let’s do something…. Let’s have some competition. Maybe we can teach somebody something.”  –The Woodsmen’s Weekend, 2005

Their original idea was to have six schools entering six men each to compete in seventeen events. The first day would consist of log skidding, two-man sawing, pulp throwing, buck sawing, log splitting and chopping, a pack board race and a novel cooking race. The second day was devoted to one and two-man canoe races as well as fly and bait casting for distance and accuracy. The winners were Dartmouth A Team followed by KUA, Williams and the Dartmouth B team. Over the years, Woodsmen’s Weekend events were held at different schools with more college teams such as Middlebury, McGill, Williams, Colby and the University of Maine; KUA was usually the only high school age team to compete with them. 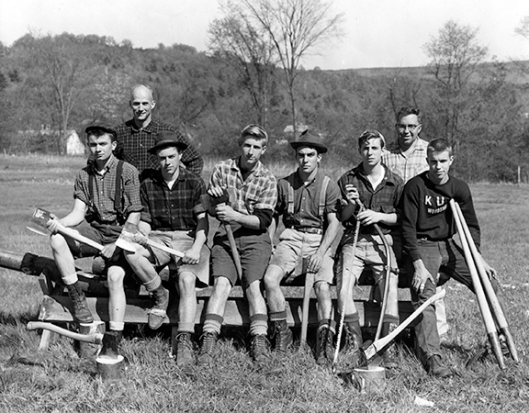 In 1959, after months of practicing, KUA held its first competitive Woodsmen’s Weekend in four years, but now with high school age students. According to the Concordia, “…the KUA axmen scored a decisive victory over their opponents: five teams organized by Claremont and Newport explorer scout groups. KUA won all of the eleven events except the felling and scored 1024 points out of a possible 1100.”

KUA hosted a second Woodsmen’s Weekend in 1959. It included this log sawing competition.

Woodsmen’s Weekend was a short, but unique time in Kimball Union’s long history. The Academy  still offers many opportunities through creative classroom programs for students to work outside learning skills such as logging and hand sawing or building structures like the outdoor classroom in the Merrill Amphitheatre or even learning to build sets for the theatre in Flickinger Arts Center. We are also fortunate that former faculty member Ira Townsend (1940-1980) left many skiing and hiking trails on French’s Ledges for everyone in Meriden to enjoy the outdoors whatever their interests.