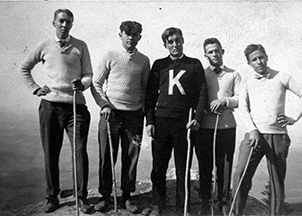 Mount Ascutney c. 1920s. Left: KUA students, with their walking sticks, on the summit. Below Right: Other students climbed the look-out tower.

In the early nineteenth century, life at KUA was limited mainly to classes, studying and church, but I recently found an early mention of KUA students climbing a mountain in 1832 in the November 1892 student newspaper, The Kimball Union. Luther Farnham, class of 1833, in recalling his student days, wrote that they mostly studied, as there were no sports. Pointing out that the Female Department hadn’t opened yet, he described the student body as “a fine class of boys some one hundred and fifty in number, chiefly from Vermont and New Hampshire.” He didn’t mention the three young women in his class. Not having official status, they hadn’t graduated with their 31 classmates.

In the early 1830s, the faculty consisted of only two men. One was the principal, Israel Newell, whom Farnham described – without guile, I expect — as “…a fine teacher and disciplinarian, a clergyman by original profession; past middle life with a young and handsome wife, who was very popular with the boys.” The other teacher was Charles Shedd, “a competent instructor” in the math department.

Farnham continued, “We did have our pleasant walks, and one to Windsor, Vt, is specially remembered, on the 3d of July, 1833. On the glorious Fourth a large party of us ascended Ascutney Mountain and greatly enjoyed the picturesque and magnificent view of which you spoke in the last number of The Kimball Union. In returning to Windsor, we visited Honorable Mr. Everett’s famous garden and grounds on the banks of the Connecticut, the State prison, and later walked to Meriden, though the day was very warm.” 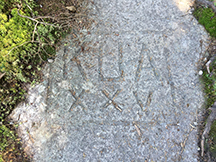 Left: Students sometimes carved their class year on the rocky summit. Faculty member Kay McCabe recently came across this stone carving while hiking on the mountain. 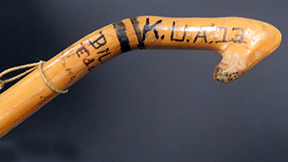 Below Right: Twenty-five seniors signed their names on this souvenir cane in 1923; the back has the inscription, “Mount Ascutney.”

Sixty years later, life had changed at KUA as it was now a co-ed school. In addition, there was an official mountain day on the calendar for everyone to climb nearby Mount Ascutney, including transportation to the mountain. In the October 1892 KUA newspaper, an article, A Trip to Ascutney, (which Farnham had referred to in the previous paragraph), described the excitement among the students as they anticipated Mountain Day. The anonymous writer reported that preparations were under way, but the exact day could only be guessed at as they waited for a favorable day. “Time dragged slowly,” he wrote. “Whispers were heard, “’Ascutney tomorrow’ always ending with the warning, ‘Don’t tell anyone, for Prof. doesn’t want it to get out.’”

When, at last, the day arrived, students rose from their beds at 4:30 in the morning and went to their assigned teams, “with ladies and gentlemen agreeably mingled….” Horse-drawn wagons took them to the foot of Mount Ascutney. The following description might sound similar to a recent Mountain Day:

“The mountain towered above us threateningly, but we set out with good courage, and at 12 o’clock arrived at the spring, one mile from the summit, in prime condition to investigate the contents of our lunch baskets. This meal was soon dispatched, and we again set out, clambering up ledges, over rocks, and through fallen trees: but even these had their advantages, and more than one young gentleman there learned to heartily appreciate the rocky hills of New England; some couples even sought out the roughest paths and toiled up them without a murmur!

“At one o’clock we reached the summit. Here words fail to describe the grandeur of the scenery now before us. To the westward, rising range after range until they blended softly with the lofty summits of the Green Mountains, we saw the foot-hills of Vermont. Below us, on every side, were secluded hamlets and flourishing towns. At our feet, lay the valley of the Connecticut, the river winding like a silver ribbon among the hills. Away in the distance rose Killington, Mansfield, Camel’s Hump, Monadnock, Kearsarge, and Cardigan. As we looked upon this scene, with the ever-changing foliage of Vermont and New Hampshire, now tinged with the brighter hues of autumn, we could not but lose all thoughts of our hard climb in a feeling of littleness, yet of exaltation, which cannot be imagined by one who has not, at some time, stood alone upon the summit of a mountain.

“Our Principal [William Cummings (1890-1900)] who is a true lover of nature, and had already climbed many of the highest peaks in New England, pointed out places of interest and drew our attention to the beauties around us, while we soon joined in his enthusiasm.”

The hikers began their descent at 3pm stopping again at “the spring” for a few minutes before making their way down to the wagons for the 15-mile ride home. Even the ride was enjoyable as they entertained themselves with songs and enjoyed the clear evening out in the open wagons.

“So sped that day in Meriden,

Forever happy now as then.

Happy it was to spend the day,

Self-conscious said we, ‘It will please

Too short the day. The curfew bell

Sounds, lights go out, and all is well.”

For those of you who don’t know Mount Ascutney, it is located in Southern Vermont and has an elevation of 3144 feet. Several villages surround its base: Ascutney, Brownsville, Windsor and West Windsor. Just 20 miles south of Meriden, the summit is visible from several Hilltop locations including the Stone Church, Dexter Richards Hall and especially Duncan House where you look out over fields and forests below the mountain.

1 thought on “Mountain Days of Long Ago”