Upper Left: Hannah Chase Kimball’s portrait hangs in the Class of 2014 Board Room in Miller Bicentennial Hall. Upper Right: This image of the …

My name is Jane Carver Fielder. As the school archivist, I can usually be found in the Archives Room located on …

In a few short weeks Kimball Union will, with much joy and pride, celebrate its two-hundred and second Commencement with …

For over a hundred years, KUA students have often produced a play just before Commencement. Many of the plays performed … 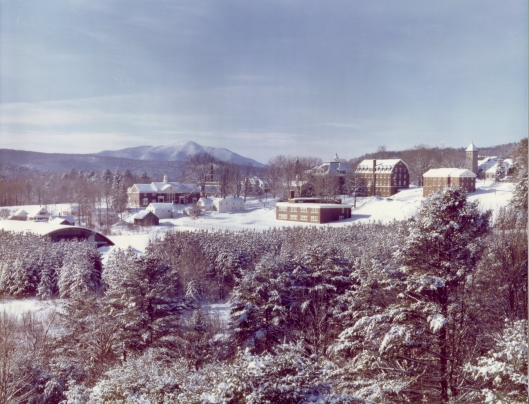 Kimball Union with Mount Ascutney in the background as seen from the Potato Patch on a winter’s day in 1976. (Photograph by former faculty member C. Parker Jones ’37)

When the first snowflakes of winter begin to fall, sounds of good cheer can be heard across campus. The early flakes soon melt and disappear on ground not yet frozen, but they bring warm thoughts of the changing seasons and the eagerly anticipated winter fun. It has always been this way, as our archival collection of photographs confirms.

Shown below are some of our earliest winter photographs found among our collection of over 160 glass slides of KUA taken at the end of the 19th and beginning of the 20th centuries. Some of the slides were taken from buildings that were privately owned at the time, such as the one of seven cross country skiers heading out on Duncan Lane, a forgotten farm track that leads from the Annie Duncan House to land above what is now Baynes Drive. The Duncan Family also gave students permission to ski and toboggan on Duncan Hill just below their house. Another slide shows five students with their snowshoes in hand standing in front of the first Dexter Richards Hall. Daniel and Hannah Kimball’s house, now the parsonage of the Congregational Church, and the old Bryant Block, originally a store built in 1812 by Daniel Kimball and his partner John Bryant, are behind them. KUA bought the store in 1858 and converted it into a dormitory. In 1910 it was deeded back to Bryant’s son, John Duncan Bryant, class of 1845, inheritor of the Kimball home; the same year, the current Bryant Hall, a gift from J.D. Bryant, was dedicated. Sadly, the original Bryant Block burned to the ground in 1927. 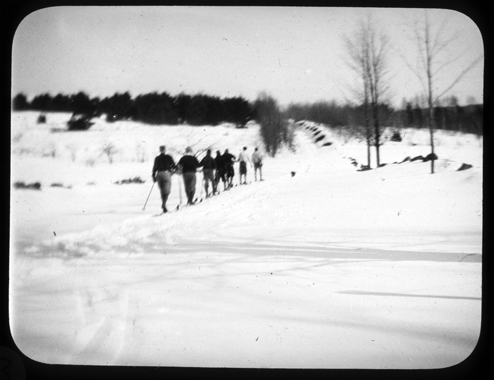 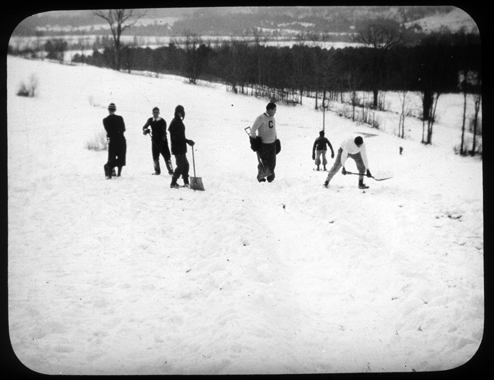 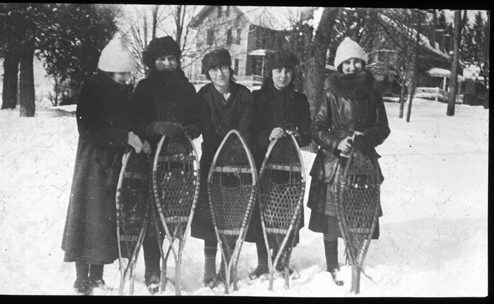 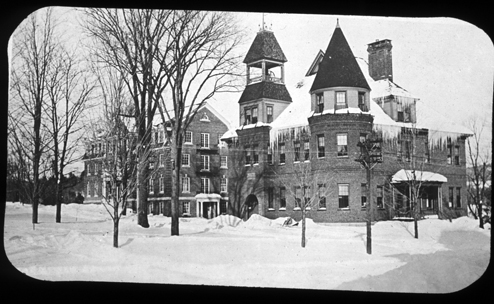 From the top: Cross country skiers on Duncan Lane. Building a jump on Duncan Hill below the house. Girls on the Hilltop with snowshoes. Bryant Hall, dedicated in 1910 stands to the left of Baxter Hall, shown before its 1921 renovations.

The following photographs are another example of students enjoying winter activities at KUA in the early days of the 20th century. The single skier seems to have made a successful run down the hill, in spite of having only one rather large pole. A long line of female students, having left their rooms in Bryant Block, file past the Congregational Church on their way to classes. The photograph appears to have been taken from the second Baxter Hall tower shown above. KUA students and faculty have always found Chellis Pond an ideal place for skating, especially on a sunny winter’s day. Even today, pick-up hockey and recreational skating are popular on the pond. Someone wrote on the back of a printed copy of the photograph of students in front of a renovated Baxter Hall, “Off for a winter hike!” 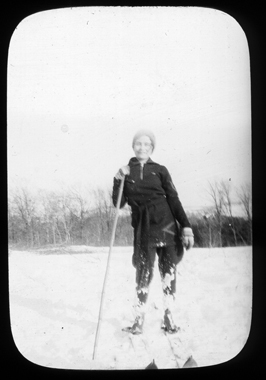 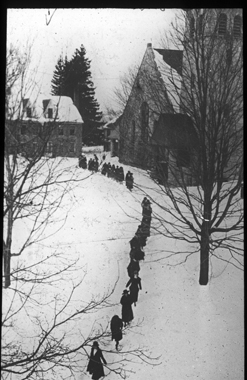 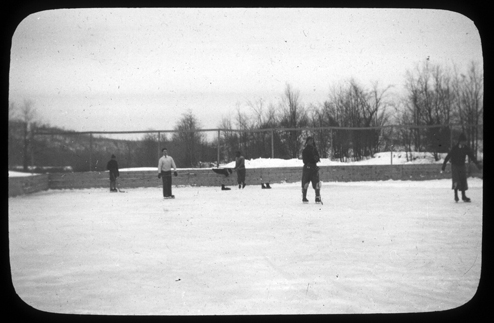 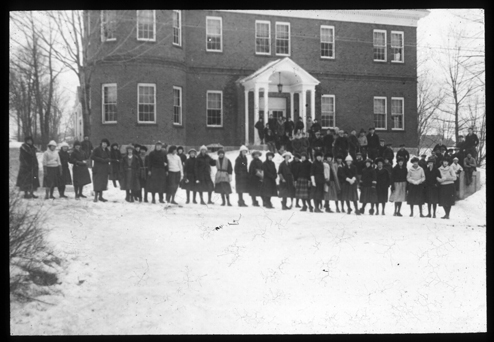 From the top: Skiing at KUA. Students on their way to class. Skating on Chellis Pond. Getting ready for a winter hike.

Mount Ascutney, standing as Windsor County’s second highest peak at 3144 feet, can be viewed from many places on the KUA Hilltop. The mountain has silently featured in many ways over the years in the life of the school, including as the site of the annual “senior climb” to the summit, a holiday from classes begun in the late 19th century in the same tradition as today’s Head’s Holiday, as a place for skiers, or simply as a source of visual pleasure as we observe it in its ever changing seasonal colors. On a lucky day, we might witness a glorious sunrise or, later in the day, just happen to look up as we rush from one thing to the next, and be captivated by a brilliant display of color as the sun sets over the mountain. Matilda Florence May Burns, class of 1904, wrote the following poem about Mount Ascutney as a freshman 116 years ago. It was published in the December 1901 issue of The Kimball Union, which served both as a school newspaper and a general KUA publication for students and alumni. The senior editor, Jason Cook, class of 1902, published her poem along with a similar photograph as the one shown below and added: “A winter sunset over Mt. Ascutney is beautiful indeed.” 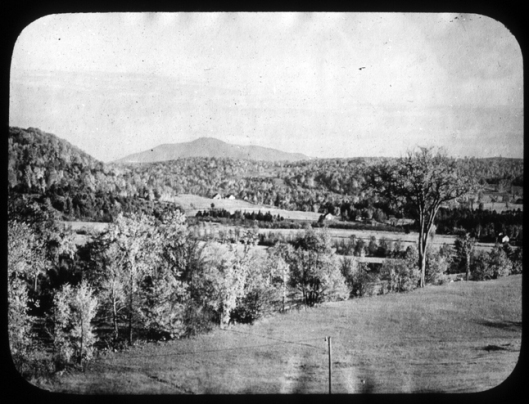 Far below it, widely spreading,
Fields of snow celestial white.
Pine trees, birch, and spruce are climbing
To the mountain’s lofty height.

Now ‘t is stripped of all the beauty
That on summer days it wears,
For the harsh December weather
Spreads a robe of whiteness there.

How I loved on summer evenings,
When the birds had gone to rest,
To sit and gaze at Old Ascutney
As the sunset tipped its crest,

When the green woods, cool and restful,
Tinted o’er with mellow light,
Soothed and calmed my restless spirit
Like weird music in the night.

But lo! The sun is slowly sinking
Down into the western skies,
Throwing forth a radiant glory
O’er the hilltops far and wide. 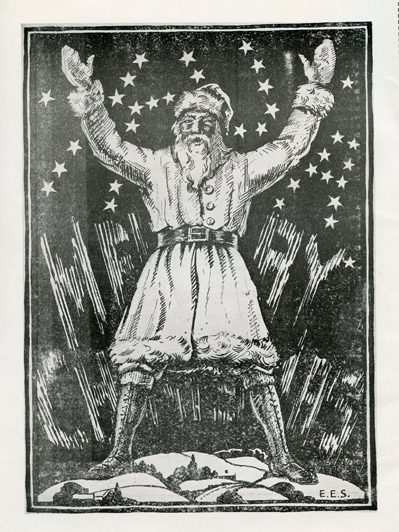 In December of 1935, The Kimball Union, featured this full page picture of Santa Claus drawn by the Assistant Editor and Art Editor Earle Sanborn, class of 1937, with his wish to everyone for a Merry Christmas.

Today, at this time of year, we celebrate and acknowledge together all religions and beliefs, whether at the shared Holiday Dinner, the Tree Lighting Ceremony that includes a visit from Santa Claus for students and young children to enjoy, or the annual Hannukah and Candlelighting Services, both held in the Congregational Church for everyone just before the winter holidays begin. This is a time for students, faculty and staff to share their thoughts and beliefs with each other and to wish all an enjoyable holiday and a good and peaceful new year.

When people retire from Kimball Union, especially after a long tenure, they are often asked to reflect on their lives …