So it was under the tall white pines in Meriden, in the

first bird sanctuary in the world, led by some of the most

well-known artists of the time, that our Camp came to be. 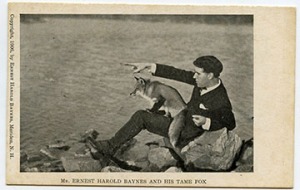 The Baynes post card collection was a donation to Archives from Sunny Davidson whose great, great aunt, Ma Kelly, was a beloved cook at KUA in the early twentieth century.

The idea for a YMCA summer camp may have sprung from a lecture held at KUA on June 8, 1910 by the renowned naturalist, Ernest Harold Baynes, a resident of Corbin Park on nearby Grantham Mountain. Headmaster Charles Tracy invited Baynes to give the lecture, “How to attract wild birds,” to the KUA community and townspeople in the old Chapel in Baxter Hall. As an extension of the lecture, Baynes asked the senior class to contribute $5 from their class fund towards the purchase of birdhouses to be placed around campus. The class unanimously voted to give him $25 and became enthusiastic participants in both projects, attracting birds and building birdhouses.

This was taken on the Hilltop and is from an album donated to Archives by Nancy Brigham whose grandmother was Baynes housekeeper.

On December 7, 1910, Tracy and Baynes met again to organize the Meriden Bird Club, its purpose being, “The increase and protection of our local wild birds, the stimulation of interest in bird life, and the gradual establishment of a model bird sanctuary.” A month later, Baynes called the first meeting of the club in the KUA Chapel. By April, with the aid of a major donor, Helen Woodruff Smith of Connecticut, the club was able to buy the farmhouse and land located next to the Meriden Town Hall. It became the Meriden Bird Sanctuary, the first sanctuary in the United States to be totally dedicated to birds.

Camp Soangetaha found its name in this Longfellow poem.

KUA joined the YMCA in 1904 so it was no surprise when Tracy “lent his name” in 1911 to the founding of the Sullivan County YMCA. Because of his leadership role as headmaster, his work with boys on the school farm and enthusiasm for “community education,” it was felt he would be central in bringing people together to create a YMCA summer camp for the “improvement of Rural Life.” At the same time, members of the Cornish Art Colony, also interested in “social good,” such as painter Maxfield Parrish, sculptor Augustus St. Gauden, and author Winston Churchill, “lent their support” for the camp. The owners of the Newport and Claremont cotton mills also supported the YMCA  as they were interested in the “moral development of their employees.” 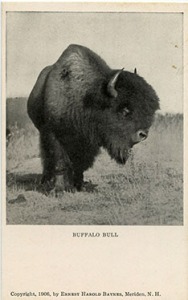 Baynes is known for having saved the American buffalo from near-extinction having brought a few of those that remained to Corbin Park to breed in safety.

The Kimball Union, June 1911, states: “… the Sullivan County Y.M.C.A., with the co-operation of the New Hampshire College and representatives of the churches of the state,” organized the Rural Life Institute for boys from August 3 to August 11, in the Meriden Bird Sanctuary. The daily program began with an hour in the morning of Bible Study, followed by specialists who spoke to campers on various agricultural topics while Baynes gave lectures and led nature walks. In the evenings, author Winston Churchill lectured on the Ethics of Citizenship, New Hampshire Governor Bass spoke on the New Movement in Politics, and Albert E. Roberts of the National Y.M.C.A., on Community Life.”

“Charles Alden Tracy, a Camp founder and head of KUA, bridged the gap between the Artist’s Colony and the Industrialists, who ultimately came together to form Camp.” –YMCA Camp Coniston

The Rural Life Institute camp, also known as Camp Soangetaha, was so successful that the Sullivan County YMCA decided to move it the next summer to a permanent home on Rand Pond in Goshen, NH. In 1916, the camp was opened to girls although there was a girls’ camp, Camp Interlaken, nearby on Long Pond in Croydon, NH.

A second connection to the author Winston Churchill occurred when New Hampshire decided in the 1940s that there were too many Long Ponds in the state and asked owners to find new names. The Dudley Family, who owned Camp Interlaken, renamed their pond Lake Coniston because of their love of Churchill’s famous book, Coniston. The two camps merged in 1963 when the YMCA camp bought Lake Coniston, and, five years later, the camp was renamed YMCA Camp Coniston. It remains a thriving summer camp whose owners claim their over 100-year history began as Camp Soangetaha in the Meriden Bird Sanctuary where “…beneath the tall pines of the sanctuary, they began hiking and exploring the wilderness.” 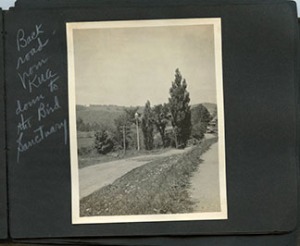 A birdhouse located on the “back hill” down to the Meriden Bird Sanctuary.

The Meriden Bird Sanctuary has held many other events since the Rural Life camp. In 1913, the same year that KUA celebrated its centenary, Baynes asked his good friend, the poet Percy MacKaye, who had written KUA’s celebratory, Pageant, to write a poem for the dedication of the Meriden Bird Club. MacKaye obliged and wrote, Sanctuary, a bird masque, whose aim was to feature the loss and extinction of birds due to human use of their feathers. Distinguished guests at the performance included President and Mrs. Woodrow Wilson, who often rented the author Winston Churchill’s Plainfield home during his Presidency. Their two daughters took part in the masque: Margaret sang the prelude and Eleanor played the character of Bird Spirit. This play was performed around the country over the next 20 years and inspired at least 120 more bird clubs.

Thank you to YMCA Camp Coniston for sharing their camp history and its brief but successful connection to KUA and Meriden and to Plainfield’s history book, Choice White Pines and Good Land for the history of the Meriden Bird Club and Meriden Bird Sanctuary.